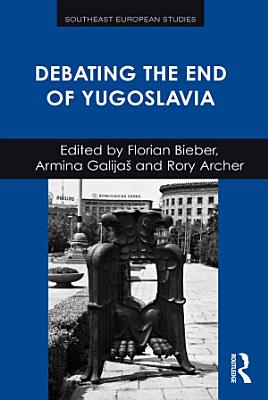 Countries rarely disappear off the map. In the 20th century, only a few countries shared this fate with Yugoslavia. The dissolution of Yugoslavia led to the largest war in Europe since 1945, massive human rights violations and over 100,000 victims. Debating the End of Yugoslavia is less an attempt to re-write the dissolution of Yugoslavia, or to provide a different narrative, than to take stock and reflect on the scholarship to date. New sources and data offer fresh avenues of research avoiding the passion of the moment that often characterized research published during the wars and provide contemporary perspectives on the dissolution. The book outlines the state of the debate rather than focusing on controversies alone and maps how different scholarly communities have reflected on the dissolution of the country, what arguments remain open in scholarly discourse and highlights new, innovative paths to study the period.

Debating the End of Yugoslavia

Authors: Florian Bieber
Categories: Political Science
Countries rarely disappear off the map. In the 20th century, only a few countries shared this fate with Yugoslavia. The dissolution of Yugoslavia led to the lar

Bibliography of Sources on the Region of Former Yugoslavia Volume III

The Aftermath of War

Authors: Albert Simkus
Categories: Social Science
At a time when most observers saw war in Europe as belonging to an ever more distant past, the wars of Yugoslav succession shattered this illusion. The direct a

Political Handbook of the World 2007

Authors: Dominique Barjolle
Categories: Technology & Engineering
This book explores the main methods, models, and approaches of food consumer science applied to six countries of the Western Balkans, illustrating each of these

Economic Crisis in Europe and the Balkans

Authors: Anastasios Karasavvoglou
Categories: Business & Economics
The economies of the European countries are still in recession, the development process is at a standstill, companies are facing financial difficulties, and the

Politics of Identity in Post-Conflict States