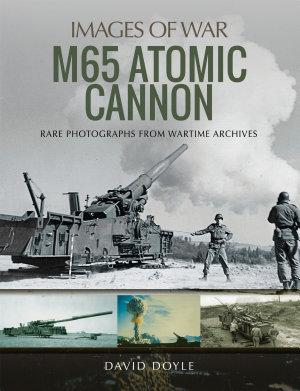 A pictorial history of this powerful piece of artillery, an icon of the Cold War era. In 1949, the US Army wanted an artillery gun that could fire a nuclear warhead in the event that guided missiles and long-range bombers proved insufficient in delivering atomic weapons. The result was the M65 280mm Atomic Cannon. On May 25, 1953, at 0830 hours, an M65 of A Battery, 867th Field Artillery Battalion, let loose with the only nuclear round the type would ever fire. Six battalions of the M65 would eventually be deployed, most in Europe with one battalion sent to the Korean Peninsula. Though never used in combat, they served as a significant tactical nuclear deterrent. Through historic photos, this volume traces the development, production and deployment of this iconic piece of military equipment from the drawing boards to the Cold War battlefields of Europe.

Authors: David Doyle
Categories: History
A pictorial history of this powerful piece of artillery, an icon of the Cold War era. In 1949, the US Army wanted an artillery gun that could fire a nuclear war

Authors: Stephen Smith
Categories: History
Delivering the heaviest possible ammunition onto the enemy and his strong points serves a number of military functions. It destroys protective positions and is

Daily Life of U.S. Soldiers: From the American Revolution to the Iraq War [3 volumes]

Authors: Christopher R. Mortenson
Categories: History
This ground-breaking work explores the lives of average soldiers from the American Revolution through the 21st-century conflicts in Afghanistan and Iraq. • Pr

The Story of the Gun

Authors: Paul J. Hazell
Categories: Technology & Engineering
This engaging and accessible book explains the scientific principles behind guns, both ancient and modern. It connects their evolution to advances in science, a

The Worlds of Farscape

Authors: Sherry Ginn
Categories: Performing Arts
Reversing a common science fiction cliché, Farscape follows the adventures of the human astronaut John Crichton after he is shot through a wormhole into anothe

EVOLUTION OF THE US SEA-BASED NUCLEAR MISSILE DETERRENT: WARFIGHTING CAPABILITIES